If you need information about e-vignette, HU-GO e-toll, route authorization and for other general information please visit www.m6autopalya.hu. 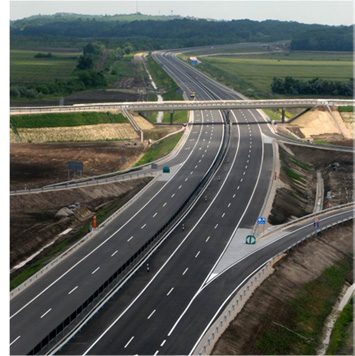 The M6 Duna Motorway connects the towns of Érd and Dunaújváros and forms part of the Public Private Partnership (PPP) program of the Hungarian State in order to connect the cities Budapest and Pécs.

Since December 2015 the new shareholders of M6 Duna Autópálya Koncessziós Zrt. are: Aberdeen Asset Management, EBRD, Swietelsky International Baugesellschaft m.b.H. and Intertoll. The Concessionaire was founded in 2004 by Bilfinger Project Investments GmbH, Porr Infrastruktur GmbH and Swietelsky International Baugesellschaft m.b.H. The task of the M6 Duna Motorway Concession Ltd. is to finance, design, construct, operate and maintain the M6 Motorway between Érdi-tető and Dunaújváros until 2026.

The Project consists of the M6 motorway from Érdi-tető to Dunaújváros plus a section of the M8 motorway that leads from the M6 to the bridge built south from Dunaújváros.

The members of the board of directors of the M6 Duna Autópálya Koncessziós Zrt. are Mr. Marc Hörnig as the Chairman, Mr. Örs Belle and Mr. Zsolt Fáskerti.

Representative of the State

The Concession Area of the M6 Project includes the section of the M6 from Érdi Tető to Dunaújváros plus a stretch of the M8 motorway from the motorway interchange with the M6 towards the new Danube bridge south of Dunaújváros. On total these are: Learn more...

How do I get on the motorway from Budapest?

The M6 motorway can be accessed through National Road 6 from Budapest. When arriving to Érd, please follow the traffic signs from the first roundabout on.

How do I get on the motorway from Dunaújváros?

What is the superstructure of the M6 made of?

The motorway has an asphalt top layer with a concrete base. The advantage of this solution is that it is less noisy than asphalt superstructures, and gives a smoother riding comfort. The concrete base on the other hand provides the benefits of the concrete roads, so the chance for rut-formation is smaller, than in case of pure asphalt roads.

What sort of environment protection measures have been taken in connection with the motorway?

The drainage water is lead away in coated ditches, preventing the eventually polluted water leaking into the ground water. The water is lead through oil separators and then - already filtered - to the closest naturally existing water streams or rivers. This is European practice to minimize the impact of road construction on the water circle. Further a protection forest is placed along the motorway to reduce air and noise pollution. In sensitive areas in addition noise protection walls were constructed. In order to protect the wildlife and to prevent crashes with animals a game fence was set up on both sides of the motorway on the entire length.

I have seen an accident on the motorway. What shall I do?

In case you notice an accident on the motorway, please immediately notify the police (107), if needed the ambulance (104), and in case of fire or leaking liquids of whatever type the fire department (105), or call the general emergency line (112). Duna-Intertoll - the operator of the motorway - will be notified by the police and will establish the necessary traffic diversions to ensure safe traffic along the area affected by the accident.

I have seen contamination on the motorway, or cargo falling off from trucks, what shall I do?

What does it mean that the motorway is constructed in a concession? If you need information about e-vignette, HU-GO e-toll, route authorization and for other general information please visit www.m6autopalya.hu.

Designed by Lastminute Advertising
© M6 Duna Autópálya Koncessziós Zrt., 2016
We use cookies to ensure that we give you the best experience on our website. If you continue to use this site we will assume that you are happy with it.OkRead more